Who were the Pharaohs?

Pharaohs were kings of ancient Egypt. A Pharaoh owned all the land and ruled over the entire country of Egypt. He was the head of the government. He sets the laws, collected taxes, made wars and defended the country from foreign invaders. 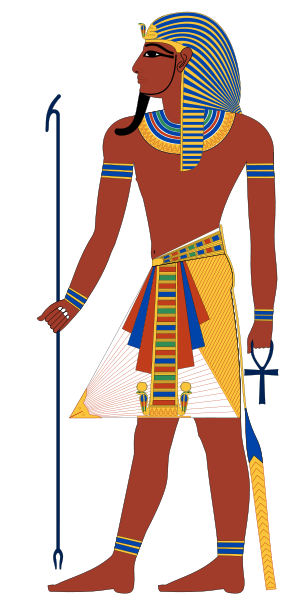 The ancient Egyptians worshipped many gods. In Egyptian mythology, the most important god in ancient Egypt was Ra, the god of the sun.  From an article in Wikipedia, it was said that he was born each morning in the East, and died each night in the West. In the night he traveled through the underworld. This is why the West side of the Nile was known as the land of the dead.

The Pharaohs were seen as “Sons of Ra”.  Pharaohs had pyramids, obelisks, and solar temples built in his honor.

As supreme ruler of the people, the pharaoh was considered a god on earth, the intermediary between the gods and the people. As such, it was the pharaoh’s duty to build great temples and monuments and pay homage to the gods of the land. Additionally, the pharaoh would officiate at religious ceremonies and was also known as ‘High Priest of Every Temple’. You can read more about Pharaohs here.

Ra-Horakhty is a combined deity of Horus and Ra, and is usually depicted as a falcon-headed man wearing a sun disk on his head. Author of Image: Jeff Dahl. This file is licensed under the Creative Commons Attribution-Share Alike 4.0 International, 3.0 Unported, 2.5 Generic,2.0 Generic and 1.0 Generic license. Available at Wikipedia Commons.

Do you think Pharaohs were god?

Child, do not be deceived, do not let supernatural deeds performed by mediums and witches convinced you that they are gods. Read the story of Moses, the 10 plagues that God brought onto the land of Egypt. The Pharaoh and all his magicians were proven powerless. Pharaohs are only human beings, made by God. They are created beings, they are not God. Mediums and magicians may be able to perform supernatural deeds by the power of demons but neither the mediums nor the demons were God, they were created beings of God.

Our God, our LORD, is Almighty, powerful, King of kings, LORD of lords. Read the story of Jesus. With His words He can calm a storm. With just a word, our LORD Jesus can wipe out the entire land of Egypt. Yet, He did not. He chose to patiently let Pharaoh turned back on his words 10 times so that the Egyptians may know that He is the LORD.